I’ve recognized a pattern from my blogging last winter. I’ve been in the time of year when I truly don’t know what to write about. It’s close to mid-winter. We’re halfway through the season. T3 has hit several times. And I just haven’t known what to write about. And that depressed me. SO! I’ve decided to write about things on do on different days of the week.

This week, my spotlight is on Monday! Particularly Mondays that I have off. No one wants to hear about what I do at work on a 24 hour Monday shift because it isn’t nearly as exciting and I don’t have any fun pictures from it.

So… Monday…
If I’m off on a Monday, that means I’ve either just worked a 9 hour night shift on Sunday (getting off work at 0800) or I’ve worked an 8 hour shift and gotten off work at 2300 Sunday night.
If I’ve worked the previous night shift, then I tend to sleep most of the day. Actually, that’s one thing I’m really grateful for this season. I’ve been sleeping rather well. Last year I had a dreadful habit of waking up at 0200 and not being able to get back to sleep, and when I had a 24 hour shift following waking up at 0200, it was no bueno.

Generally, I’m up in time for lunch. I tend to go to lunch around 11 so I can eat with the majority of my fire family, then it’s back home to do chores. Laundry, sorting trash in my room, vacuuming, etc. I’ll occasionally make a call to friends in the states, depending on their timezone. Sometimes I nap. Other times I’ll go to the gym. Last Monday I had a lesson in hockey in the big gym which was followed by dinner and some time in the hot tub.

On my most recent Mondays off, I’ve gone to the kitchen to help Miles with making popcorn for Disney Movie Night in the Bog. Actually, I take that back. I go and talk and take pictures while he makes popcorn.

Making popcorn is serious business for Miles. No, really. Forget the prepackaged stuff. He makes popcorn with the most unique combinations of taste and texture. He brought some over to me one night in dispatch that was absolutely mind blowing. It had parmesan cheese and oregano and red pepper flakes in it… Oh, and have you ever put chips and dried craisins in popcorn? You should. Now I’m hungry…

Normally, however, I go to Southern Exposure (open as a bar during the summer, and as a lounge/coffeehouse during the winter) and participate in the McMurdo 300.

What is the McMurdo 300, you may ask? It’s only the finest combination of sports on the southernmost continent. Shuffleboard (played on a table, not on the ground), Darts and Billiards. It’s a good time to unwind, listen to music, have a few drinks or have some coffee…

So that, in a nutshell, is what I do on the Mondays I don’t have to come in to work. 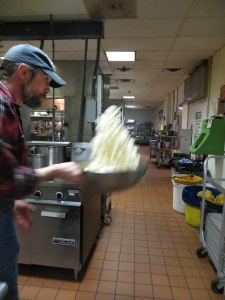 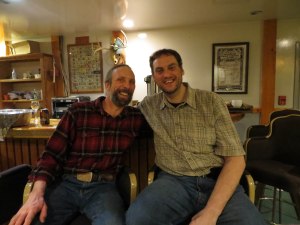 Hello! I'm a so-so photographer, okay writer, former 911 telecommunicator and world's best Aunt. Closing in on 40, I find myself at a point in my life where I have no idea what I want to do next. I'm currently spending summer 2021 in Texas with my boyfriend, Robert and helping him start building a plane before he goes back to Antarctica in August. View more posts